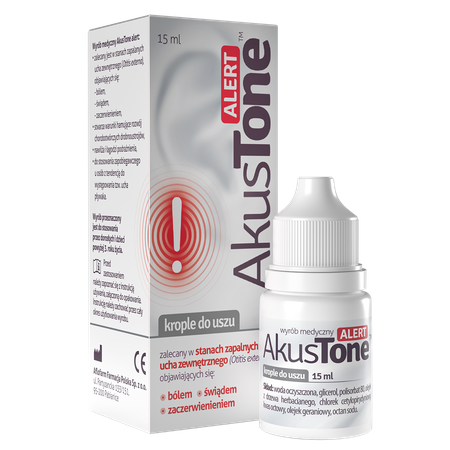 AkusTone alert is recommended in inflammatory conditions of the external ear (Otitis externa) manifested by pain, itching and redness and related to e.g. improper hygiene, the presence of impacted cerumen within the ear or the so-called swimmer’s ear.


AkusTone alert creates conditions in the external auditory canal that inhibit the development of pathogenic microorganisms such as bacteria and fungi, the main causes of external ear inflammation. Additionally, the product contains geranium and tea tree fragrance oils, which are also natural preservatives preventing the development of microorganisms. Glycerol contained in drops, thanks to its moisturizing and coating properties, soothes irritation and softens the impacted wax cerumen pressing on the walls of the ear canal, facilitating its removal. AkusTone alert can also be used as a preventive measure for people with a tendency to recurrent external auditory canal infections associated with frequent or prolonged contact with water (the so-called swimmer’s ear).

Application and handling of the product:
The product is intended for local use in the external auditory canal by adults and children over 3 years of age.
In inflammatory conditions of the outer ear, unless the doctor recommends otherwise: 1-2 drops 3-4 times a day.
In order to prevent infection of the external ear canal (the so-called swimmer’s ear): 1-2 drops after swimming in the pool.
The dropper (tip of the applicator) should not be pushed deep into the ear in order not to damage the hearing organ.

Special warnings and recommended precautions:
Do not use in case of hypersensitivity to any of the product components. Do not use in
in case of perforation of the eardrum, open wounds or when there is a foreign body in the ear and
concomitantly with other locally-active ear products. Do not apply to eyes, nose or
of the oral cavity. Do not administer the product to the ear with the hearing aid worn. The product should be applied at least one hour before inserting the hearing aid.
Any severe earache is an indication to consult a doctor. Children's earache should always be consulted with a doctor. The product is intended for short-term use. If after 2 days
there is no improvement or within 2 days of starting the application the patient feels worse, you should consult a doctor. Additional symptoms such as fever, ear leakage or the suspicion of the presence of a foreign body in the auditory canal is an indication for consultation with a doctor.

Place and conditions of storage:
Keep out of the reach of children. Store in the original, sealed packaging. Please pay attention to the appropriate storage conditions. Do not use the product after its expiration date.

Information for the user

A medical device is intended for treatment of medical conditions or relief of their symptoms where the essential intended effect is achieved by means other than the use of pharmacological, immunological or metabolic agents.

See how we care about quality

All our products are subject to strict safety requirements

We use rigorous quality control standards and procedures to ensure the highest level of safety for all our products.

See how we care about safety